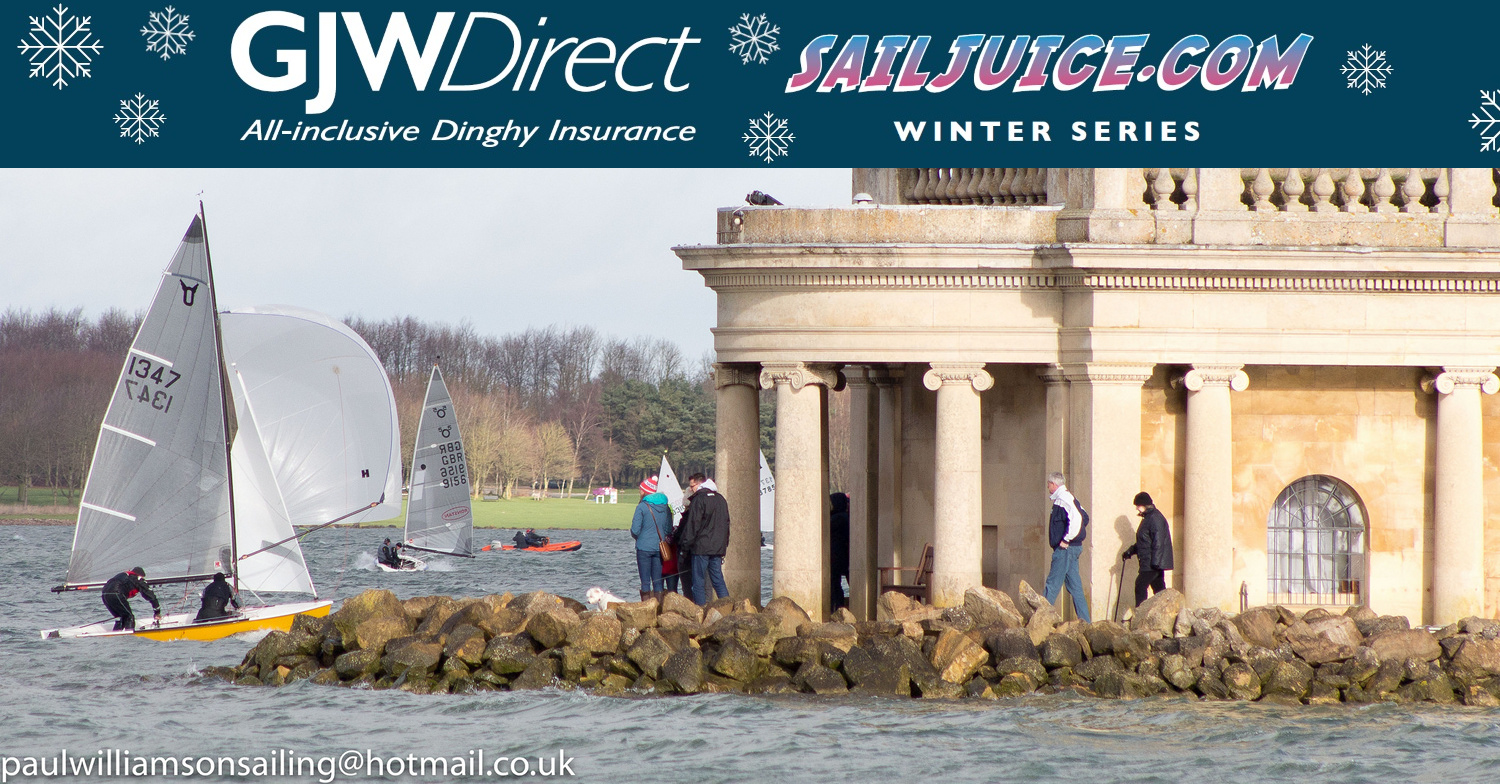 Between Storm Henry and Storm Imogen, the Tiger ROARED

Robbie King and Marcus Tressler sailed their 420 to victory in the final windy event of the GJW Direct SailJuice Winter Series, the Rutland Challenge for the John Merricks Tiger Trophy. With the breeze gusting up to 32 knots in the final race, it was a performance to make the late John Merricks proud. The Olympic silver medallist of 1996 won the inaugural Tiger Trophy in a 420 at a similar age to 16-year-old King, and there was nothing that the irrepressible Johnny Merricks liked better than to battle his way round an impossibly windy race track - and winning.

The teenagers were pushed hard by the veteran Fireball duo Dave Hall and Paul Constable who won the first race, were 2nd in the next, and discarded their final race score of 8th. However King won on countback with impressively consistent scores of 2,1,(3). The final race went to another Fireball sailed by another strong veteran team of Kevin Hope and Russell Thorn.

This was the seventh and final event of the GJW Direct Sailjuice Winter Series which has been predominantly windy ever since the first event back in November, the Fernhurst Books Draycote Dash. It’s a testament to all seven clubs that the events have managed to go ahead as scheduled this fierce winter. As for Rutland, the race team monitored wind strength throughout the week and things did not look good. 30 knot ‘breezes’ were anticipated and the prospect of cancellation looked a very real possibility (The Rutland Challenge for the John Merricks Tiger Trophy is never postponed).

By Friday morning, David Wilkins, the principal race officer sensed a small opportunity as the wind strength on site was less than the forecast. So the Tiger beer was collected from Everards Brewery in Leicester, the event sponsor since the regattas inception 22 years ago. The large race team were not stood down and the Rutland SC staff prepared to handle the 130 entries.

For the Saturday, it looked like the 18-22 knot winds would make racing possible until it gusted up to 30 knots and stayed there. This didn’t stop some sailors staying out for a bit of fly-by for the VRSport TV crew, but it was deemed just too windy for racing.

In the evening, Rutland Sailing Club hosted a bangers ’n mash dinner to celebrate the memory of the club’s most famous son, John Merricks. Meanwhile, the race officer had polled the sailors, the majority of whom voted for three handicap races on Sunday instead of the traditional single pursuit race.

Sunday dawned with a strong south-westerly breeze still blowing, but this time the average wind strength stayed at around 18-22 knots with occasional gusts to 25 in the first races. However the final race had a sting in its tail, with the gusts blasting up to 32 knots and causing havoc on the race course. In addition to Everards, the event was supported this year by a local representative of Herbalife who supplied all sailors with a bottle of CR7, ‘designed to maintain performance during prolonged exercise’, which was just what was needed.

In the teeth of such fierce conditions, there was a high level of attrition, with the traditionally strong-wind classes of the 420, Fireball and 505 coming to the fore. Tom Gillard and Andy Couch raced their Five-Oh to 5th place behind the 420 and Fireballs, with GP14 World Champions Ian Dobson and Andy Tunnicliffe the best of the non-trapeze boats in 6th place.

The pressure was on to complete the results in time for prizegiving and this process was considerably assisted by JMST Trustee and legendary coach Jim Saltonstall, standing in for John’s dad Dennis who has been suffering from ill health. Jim presented his ‘Mr Motivation’ oration to the gathering of ‘ferrets’ of all ages, the youngest, Jack Berry, age 13 (Topper 58th) and the oldest Alan Johnson, age 68 (Enterprise 72nd).

With one of the closest finishes ever, the 420 crew of Robbie King and Marcus Tressler (combined age 33) just beat the Fireball of Dave Hall and Paul Constable (combined age 108), both on equal points but the 420 had a lower discard, Dave having a swim in the last race. Dave commented to young Robbie on the veritable ‘who’s who’ of top sailors names on the Chinese terracotta Tiger Trophy with John’s being the first.

Hall and Constable did come away with the Shere Khan Trophy for the highest finishing combined crew over 75. This pair have supported the regatta every year since it was dedicated to the JMST following John’s death. The Lady Tiger Trophy went to Val Millward (25th Challenger RSC), the Junior Tiger Trophy was awarded to the 420 girl team of Niamh Harper and Rebecca Coles with a combined age of 30 (33rd 420, Loch Tummel Sailing Club).