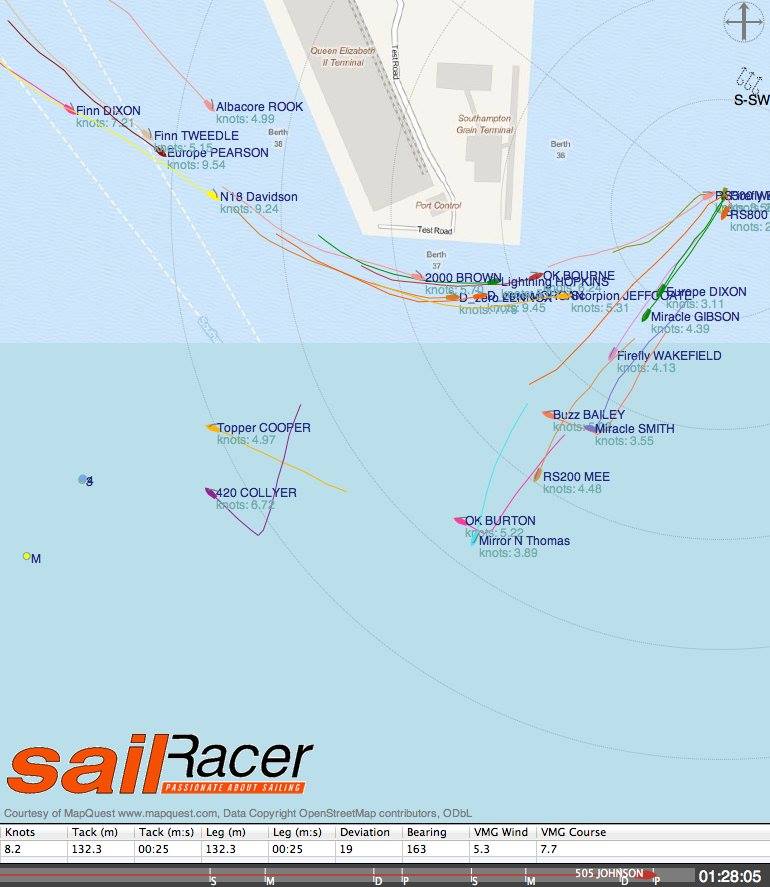 2017 Battle of the Classes pursuit race will be held this Sunday (23), with first signal scheduled for 14.35

Spectatos can watch from the Southampton Boat Show Marina pontoons,  with live SailRacer GPS tracking available from the event website.

The 2017 Battle of the Classes Pursuit Race will feature at the YachtMarket.com Southampton Boat Show on 17th September 2017. The annual pursuit race is a fantastic show case for the diversity of the UK dinghy racing scene, with many of the country’s top sailing representing their classes.

The Battle of the Classes will be held in front of the Southampton Boat Show Marina, with great spectating from the outer pontoon. Race updates and commentary will be broadcast across the Show PA. Live SailRacer GPS tracking will be available via the event website:

The first start is scheduled for 14:30, with the experienced race management team from Royal Southampton Yacht Club getting the race under way for the star studied fleet.

First off will the RS Tera Sports, and the youngest competitor 12 year old Adelicia Lavendar and 13 year old Lizzie Foster leading the charge.

Five minutes later, 2017 Topper World Champion, Scott Wilkinson will start who will be looking to go one better than the classes second place in 2016.

The 14 minute starting point sees a big succession of single handers starting, with the Laser 4.7 of Thomas Parkhurst, 2nd at the Nationals and the Comet of Bob Dodds, also 2nd at his class nationals.

The Byte class have entered a strong team with two boats each for CI and CII rigs. The Byte CIs start at the 15 minute mark with National Champion, Rik Whitehouse and Emma Pearson. The faster Byte CIIs (18 minutes), sees National Champion Louis Saunders and Stu Moore trying to catch the CIs. Also starting at the 18 minute mark is top Solo sailor Oliver Davenport.

Next away are the Lasers (20 minutes), with Craig Williamson and Joseph Drake. Craig was second at the 2017 Nationals and is a regular front runner in the highly competitive GJW Direct SailJuice Winter Series.

Also starting at 20 minutes is the 2000 of Kev and Jake O’Brien from the RAF Sailing Association. Top Wayfarer sailors, David Roberts and Michael Bryant get away at 21 minutes.

Ben Rolfe, who was 4th at the RS Aero 7 World Championships, flies the flag with the fast growing RS Aero class, starting at 23 minutes.

Two top RS100s start at 27 minutes, with Steven Lee and Alistair Dickson who was crowned class champion a couple of weeks ago.

At 30 minutes the RS400 of Peter Jackson and Alex Noakes start, joined by the Fireball of Isaac Marsh and Oliver Davenport.

The Nationals 18s, the largest boats in the race start at 33 minutes, will make an impressive sight sailed by 3 crew. The two N18s will be sailed by Maria Richards, Hugo and Jessica Berney, joined by Ben and Jeremy Vines and Steve Watton.

The fast B14 skiff of Geraldine and Chris Farmoor heads off at 36 minutes.

Finally at 60 minutes the Foiling Moth of Dan Ellis, Inland Champion will look to make up the time deficit and fly past the slower boats with just 30 minutes of race time. International Moths have been previous winners of the Battle of the Classes.

The prize giving will be held at the prestigious Royal Southampton Yacht Club, Ocean VIllage.

The Battle Of The Classes Pursuit Race will feature at the Southampton Boat Show on the 17th of September 2017. Hosted by Royal Southampton YC and SWAC with live GPS Tracking and online commentary from SailRacer.