Gearing up for the Gallop in North London 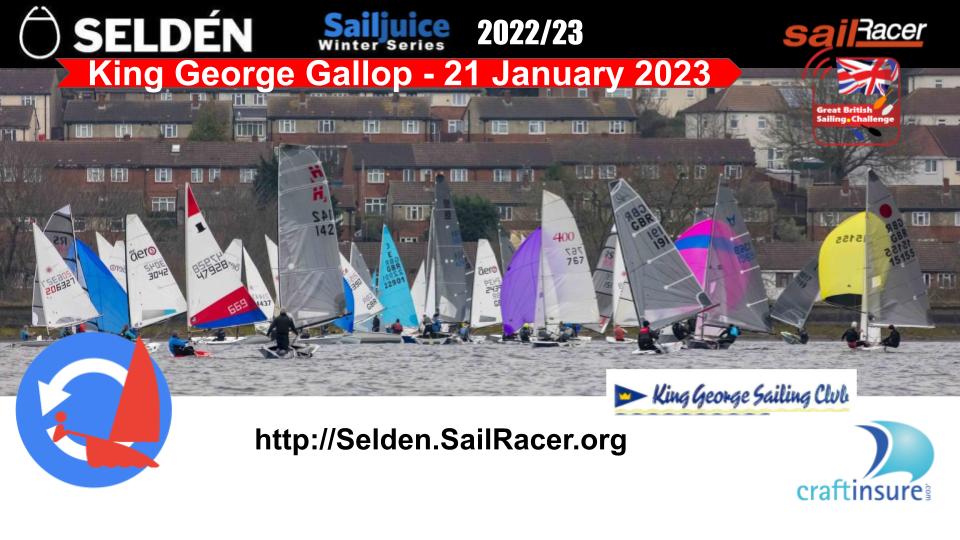 From the windy Bloody Mary in south-west London, it’s off to the King George Gallop in north-east London, the seventh leg of the Seldén SailJuice Winter Series...

The King George Gallop is less than a week away, the seventh leg of the Seldén SailJuice Winter Series which takes place in North London. It’s always a super-friendly welcome at King George Sailing Club, so get your online entry in ASAP

Here’s how things stand overall and in the sub-categories after six events, most recently the GJW Direct Bloody Mary won by teenagers James Crossley and Noah Fitzgerald in their 29er skiff. On a day when a simple hiking boat like the Laser just shouldn’t have been able to compete against the trapeze boats, Ben Flower sailed an incredible Bloody Mary to finish in 7th place. His success has had an impact on the overall standings...

A total of 62 different classes have gained Craftinsure Top Class rankings. RS800s were top class at GJW Direct Bloody Mary, and one of the biggest fleets with 11 entries with the class also running a training day on Sunday at Queen Mary SC. Second were the 29ers and third, Laser (ILCA 7s), who still lead the overall Craftinsure Top Class rankings after 17 races, with the RS200s second and Laser Radial (ILCA 6s) third. Based on the best three results for each class across every race.

Sailors from 88 different clubs have now competed, with HISC top club at the Bloody Mary, from hosts QMSC and previous winners Lymington Town in third. Overall Staunton Harold SC hold onto top spot, with Great Moor SC moving up to second and Draycote Water SC dropping to third.  Based on the best three results for each club across every race.

Simon Lovesey and Andy Rice, series organisers, will be looking back through the events so far, and looking forward to the next, on Facebook Live.The winner of another Seldén R60 ratchet block will also be announced, based on which sailor’s photo by series photographer Tim Olin has featured prominently in social media. Join the live show this Monday...

The following events are in the Seldén SailJuice Winter Series 2022/23:

Craftinsure aims to make boat insurance as effortless as possible with an easy to navigate website and app which allows you to make changes to your cover quickly and with ease. With ‘New for Old’ cover at competitive prices, Craftinsure insures over 25,000 boats with excellent customer reviews which you can read on Trustpilot.