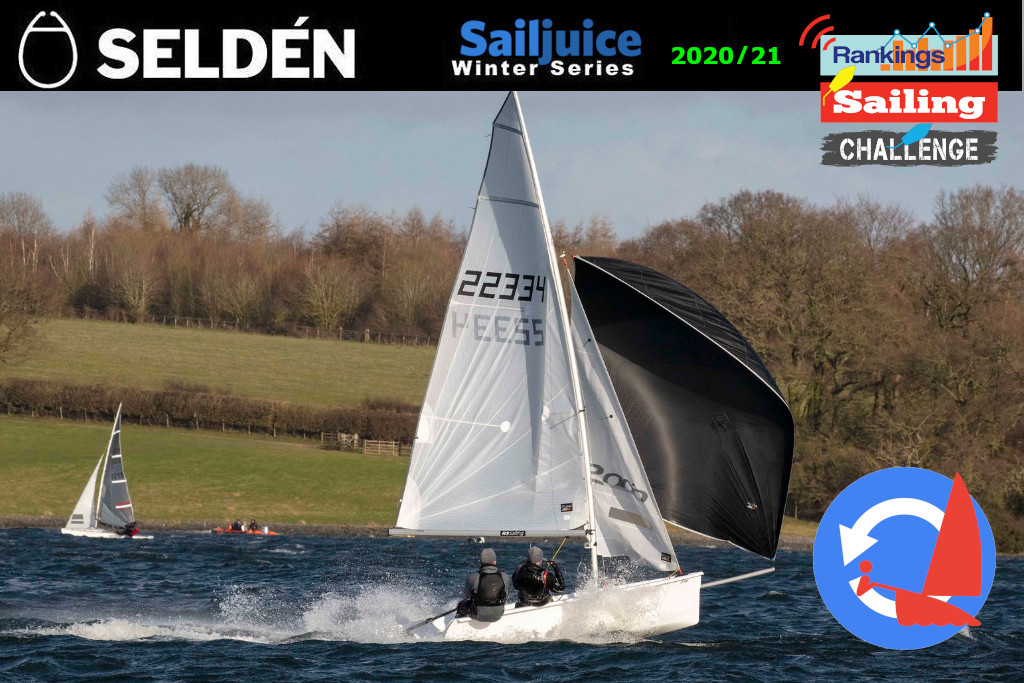 Reigning champions of the Seldén SailJuice Winter Series, Simon Horsfield and Katie Burridge, are set to race their 2000 doublehander at the Grafham Belle on the weekend of Saturday 29 May and Sunday 30 May.

With a maximum entry limit of 75 boats, this multiclass handicap event at Grafham Water Sailing Club is likely to book to capacity. After so little in the way of open meeting or championships activity in the past year of UK lockdown, the Grafham Belle aims to offer good handicap competition made as fair as possible by the Great Lakes numbers, one of the most respected variations on the standard RYA PY numbers.

With two weeks to go, the event is already attracting a diverse range of entries from the dinghy scene. Singlehanders such as the Solo, Streaker, Phantom and Laser Radial will do battle against each other, while the Albacore and RS400 represent variations on the classic hiking doublehanders although will have to be at the top of their game to beat the 2000 of Horsfield/Burridge from Thorney Island Sailing Club.

At the faster end of the spectrum are the 4000 of Neil Heffernan/ Jo Morrison from Queen Mary SC, Minnis Bay SC’s Craig Thompson and Paddy Lewis in a 505 and Maidenhead SC’s Ian Stone in a Musto Skiff. Blithfield's Andy Couch has proven himself a class act in a range of classes including the Phantom and 505 but for Grafham he’ll be steering a VX One sportsboat around the track. If it’s light to medium airs for the weekend, Colin and Oly Murray’s Norfolk Punt will be very fast and hard to beat. If you’ve never seen a Norfolk Punt in the flesh, by the way, events such as the Grafham Belle are a great way to find out, and to enjoy the full array of small boats in Great Britain’s vibrant dinghy scene. It’s like a Dinghy Show on water!

Meanwhile, we have to remember that open meetings have to proceed in a safety-first manner. Co-organiser of the Seldén SailJuice Winter Series, Simon Lovesey, has been promoting the continuation of sailing wherever possible within COVID guidelines, via his non-for-profit organisation RestartSailing which he established during National Lockdown #1 in spring 2020. Simon said: “We are working with sailing clubs that are keen to make things happen wherever it is possible to do so in a safe, COVID-compliant manner. While other clubs have not been able to go forward with their planned events, it’s great that Grafham is going ahead with the Grafham Belle. With its long foreshore and multiple slipways, it should be very possible for everyone to launch and recover their boats whilst maintaining good social distancing.”

All the boats will carry GPS trackers provided by SailRacer, which help spectators to follow the action both on site and online, and also determine the results from some of the sub-category competitions as part of the Great British Sailing Challenge (GBSC).

Co-organisers Andy Rice and Simon Lovesey are working with title sponsor Seldén Mast to continue to run the 2020/21 edition of the Seldén SailJuice Winter Series through to a concluding event at Rutland Water, the rescheduled John Merricks Tiger Trophy on the last weekend of August.

With so many of the original events cancelled over the winter, and only the Datchet Flyer able to take place in December 2020, other events this spring/summer have been brought in to create some kind of Series before, hopefully, we see a return to normality for this winter’s edition of the Seldén SailJuice Winter Series.

Current leader of the revamped Series, because of his victory at Datchet last December, is Ian Dobson in a Solo. Horsfield & Burridge sailed their 2000 to runners-up at the first event, so go to Grafham well placed overall.

The following events will count towards the scoring of the Seldén SailJuice Winter Series 2020/21: