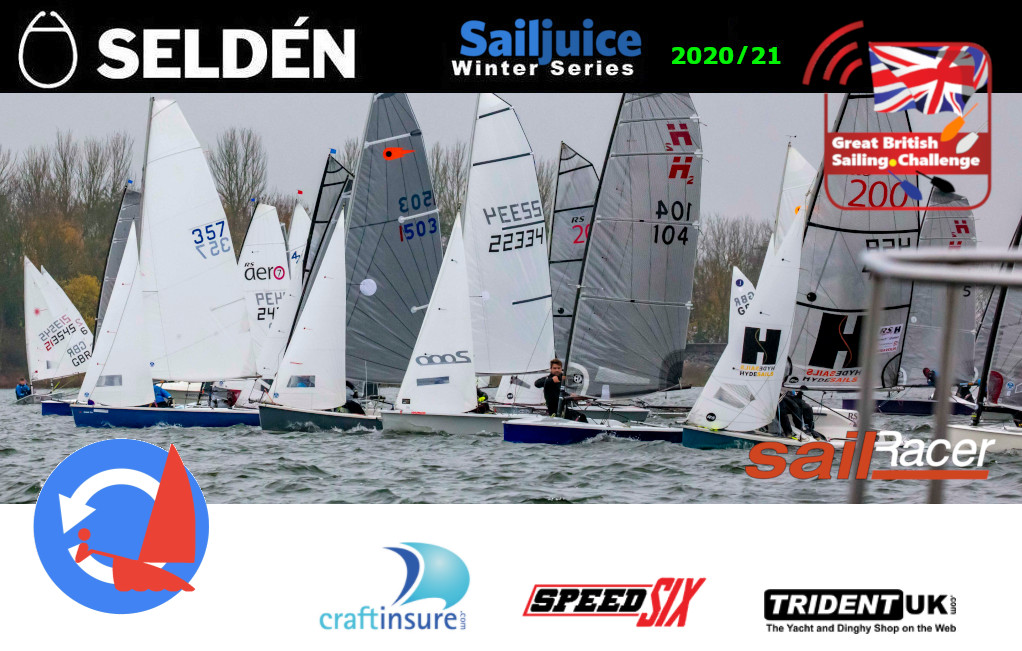 The Fernhurst Books Draycote Dash was set to be the opening event of the Seldén SailJuice Winter Series 2020/21 but the Covid lockdown now sees the Dash move to the weekend of 6 & 7 March 2021.

Pre-Register    Draycote’s commodore Jeremy Atkins said he regretted the move but was given no choice but to shift to March, which will make the Dash the concluding event of the Series.

Also the Bloody Mary has been cancelled and will not take place on its scheduled date which had been for 9 January 2021. Club commodore Richard Steele commented: “After all the hard work that the team has done over the summer to open the club for members sailing, it is a great shame that we cannot extent an invitation to the many competitors who want to sail the Bloody Mary to join us here in January.

“However with the very limited space we have on land and when launching, we do not believe we could maintain a safe environment for competitors, volunteers and staff alike.  This decision has also been taken in the light of the worsening coronavirus situation in the country, the impending lockdown and potential future restrictions.”

Principal Race Officer Andrew Craig said: “November is the time that our detailed planning for the Bloody Mary starts.  We needed to decide now if we could and would go ahead.  It is a big task for our club involving 60 volunteers and 40 staff to run the race on land and on water.  We needed to let our great band of helpers know what was happening, as well as competitors. We are very sorry not to be able to hold the 2021 race but are sure that there will be no less a turn out in 2022 as a result.”

Despite the unfortunate impact on the traditional events which have proven so popular with dinghy sailors in recent years, the organisers of Seldén SailJuice Winter Series 2020/21 are planning for alternative activities on the weekend that the events had been set to take place.

Co-organiser Simon Lovesey, who has been busy throughout 2020 with his Restart Sailing initiative to maintain the sport’s momentum, said: “For the original Fernhurst Books Draycote Dash weekend, we will be running a Facebook live session on Saturday 21st November with the chance to relive some of the great past moments of this popular event.  For those who have pre-registered for the original dates will be contacted shortly to see if they want to transfer their interest to the new dates 6 & 7 March.

Despite the original event’s postponement, the promotional code DASH continues to entitle all entrants to the series to 25% off all Fernhurst Books’ titles purchased from the Fernhurst website (www.fernhurstbooks.com) between now and 31 December.

Queen Mary Sailing Club has made the reluctant decision to cancel the Bloody Mary that was due to take place on 9 January 2021. It’s only the second time in its long history that this Pursuit Race classic has had to be called off, but there will be a remote race in its place.

However, co-organiser of the Winter Series, Simon Lovesey, has proposed an alternative format so that sailors can still enjoy competing against others around the country. “When we launched this winter's series last month we made a commitment to organise something on each of the dates whilst acknowledging that events may not happen in the usual manner.  One of the options is to run a remote event,  where people compete at their own clubs and we use GPS tracking data to merge results together.

“Over the summer we have successfully run over 100 races in this manner,  including some class championship replacements. One of the key benefits of the format keeps people engaged with sailing and events. For the 9th January we hope to be able to offer a remote event as a substitute for the Bloody Mary,  Covid guidelines at the time permitting.”

Meanwhile, plans continue for the other events in the Series to go ahead as originally announced, always with the proviso that things can change at any time, which is why the criteria for pre-registration have been designed to be as flexible and fair as possible.

Here’s a reminder of how pre-registration works, and the criteria by which entries are prioritised:

£5 advance deducted against the actual entry fee for each event

Order when payment for advance received (earlier entries given priority)

Number of events registered for

If a sailor is successfully in being allocated a space against an individual event they will be sent a payment link for the balance of the entry fee which has to be paid within 10 days unless otherwise stated in the payment request.

If entry not allocated, advance refunded 100%.

No refunds if the event goes ahead and sailor doesn't attend after being allocated a space.

Pre-registration for the events is now open at www.sailjuiceseries.com

The following events are in the Seldén SailJuice Winter Series 2020/21: