Mild and breezy forecast for this weekend’s Tiger Trophy 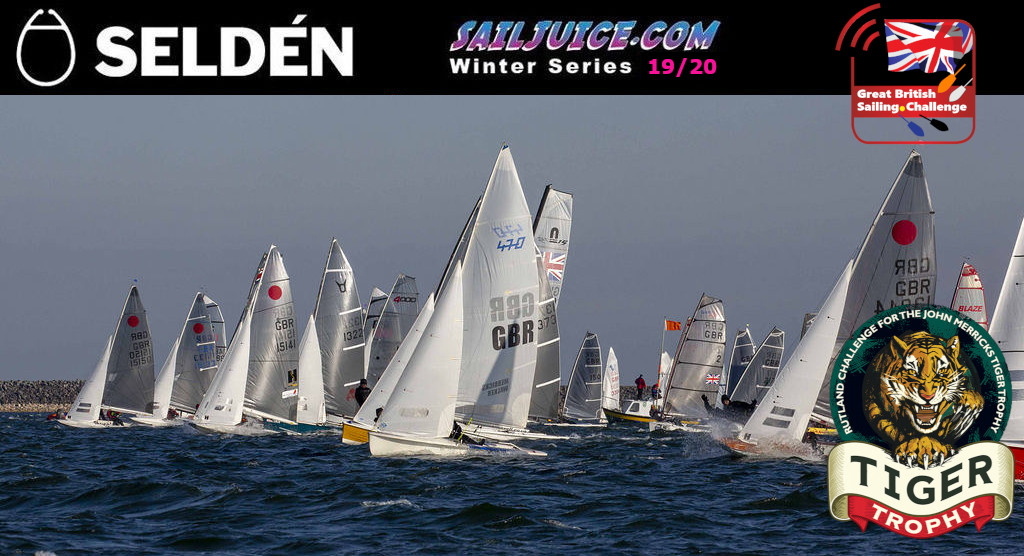 There’s already a good line-up of 420s for this weekend’s Tiger Trophy at Rutland Water, with more than 40 different classes signed up for the sixth event of the Seldén Sailjuice Winter Series...

ENTER HERE >>>>  With online entry about to close, there are more than 110 boat entered for the John Merricks Tiger Trophy, the sixth event in this season’s Seldén Sailjuice Winter Series. The 15 to 18 knot forecast could be good for the trapeze boats, with three back-to-back handicap races scheduled for Saturday, followed by a slightly lighter wind for Sunday’s non-discardable Pursuit Race. Among an entry of almost twenty 420s are recent winners of the Bloody Mary, Dylan McPherson and Jack Lewis, who might fancy their chances of another massed-fleet handicap victory.

Perhaps the catamarans such as the Nacra 15 or the Nacra Carbon 20 could come to the fore in the full-power conditions expected on Rutland Water this weekend. Meanwhile there will be plenty of hard-fought battles throughout the fleet. Penny and Russ Clark will be racing their 505 hard against the reigning National and European Champions, Roger Gilbert and Ben McGrane. The GP14 has attracted some of the UK’s best sailing talents this winter and there’s a good turnout from the hiking doublehander this weekend, with multiple Endeavour winner Nick Craig/ Roger Phillips up against the likes of Scorpion expert Pete Gray sailing with Richard Pepperdine.

Both Craig and Gray are former winners of the Seldén Sailjuice Winter Series, with a number of past or present champions at Rutland this weekend. Winner of the very first Sailjuice Global Warm-up, as this series was once known, Olly Turner is racing an RS200 with Sam Mottershead. Mike Sims won the series in a Solo but this season is racing the RS400 with his crew Mark Lunn. Former Fireball World Champion Tom Gillard is racing a Scorpion with Rachael Rhodes, both past winners of the Series in different years.

There are well over 100 entries already, and online entry closes including Dave Hall and Paul Constable whose Fireball has made an appearance at the event since it began more than 20 years ago. Favourites among the Fireballs will be reigning World Champions and former Tiger winners Ian Dobson and Richard Wagstaff. Last year’s winners at Rutland Neil Marsden and Jonny McGovern will be competing in a 470.

There’s a whole range of boats competing, from the 2.4m sit-in keelboat along with the K1 and K6s, some Challenger trimarans, a smattering of catamarans and a whole host of hiking and trapezing monohulls up to an SB20 sportsboat.

The Tiger Trophy is also a celebration of the memory of John Merricks, the winner of the first Tiger Trophy before he went on to win an Olympic silver at the 1996 Games with Ian Walker in a 470. The Tiger Dinner takes place again this year at RSC starting about 7pm on Saturday evening.

ORDER MEAL TICKETS  The cost is £10 if booked online beforehand on SailjuiceSeries.com , or you can order from the RSC office before Saturday (01780 720292). It is £12 if booked on Saturday. The menu will be John’s favourite of Bangers & Mash with Peas and Onion Gravy. Sausages will be usual Lincolnshire or if preferred, vegetarian, vegan or gluten-free sausages - please specify your requirements in advance. This is followed by apple crumble and custard and cream.

This event is a major fund raising event for the John Merricks Sailing Trust. After racing from after 5pm, there will be a “Happy hour”, with pint bottles of Tiger Bitter provided by Everards being sold at £2 each, with money donated to JMST. A perfect way to enjoy the Six Nations Rugby which will be playing on the big screen in the bar. Either before or during the dinner, there will be a “Experts Q&A” session compered by Ian Walker. A number of top sailors at the event will be open to questions and share some of their experiences and advice on how to improve performance and results. So bring any questions you want to ask.

Online entry is open until 9am Thursday at: www.sailjuiceseries.com

As we head to the penultimate round, the Sailing Chandlery Top Class rankings are getting very close. Defending champions, the Laser class jump to top spot, and the RS Aero 7 class up one to second. The GP14s, who led the Sailing Chandlery Top Class rankings since the start, slip to third. Rankings are based on the best three results for each class across every race.

Previous winners, Burghfield Sailing Club, have been making steady progress, climbing four places after Round 6, to take top  spot. The podium is very close, with Draycote Water SC and Burton not far behind. Based on the best three results for each club across every race.

The following events are in the Seldén SailJuice Winter Series 2019/20):

Seldén Mast Ltd is the world leader in dinghy spars. More races are won by Seldén Spars than any other brand. Dinghy spars are made using our unique XPS aluminium with CNC cut tapers, automated welding and heat treating resulting in the highest quality and most consistent dinghy spars available. Seldén produces about 400 carbon masts per year for boats including high performance dinghies and race yachts using state of the art Mandrel Filament Moulding Technology.