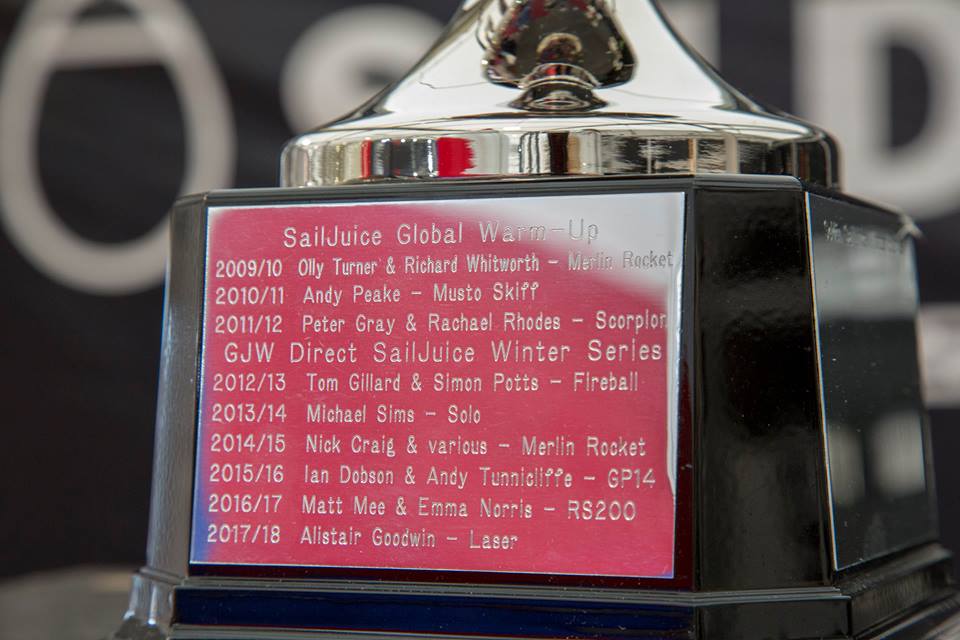 Great Britain’s most popular winter sailing series is back for its 11th season, with a few subtle upgrades....

The 11th edition of the Seldén SailJuice Winter Series kicks off in a few weeks’ time, starting with the Fernhurst Books Draycote Dash on 23 & 24 November 2019. The same seven events are back, along with a new one, the King George Gallop on 26 January 2020.

Enter Now >>> The Seldén SailJuice Winter Series aims to appeal to as many classes as possible, with typically almost 100 different types of boat represented across the season, from fleets as diverse as the traditional Norfolk Punt and National 18 to emerging classes like the Hadron H2 singlehander.

Some fleets choose to use some of the events as their class championships, such as the RS Aero which typically brings up to 50 boats for the concluding event of the season, the Oxford Blue, which has served as the Aero Winter Championships. This November’s Draycote Dash, for example, will also be the Inland Nationals for the Hadron H2 fleet.

Over the years the Great Lakes Handicap Group has set its own variation of the standard RYA PY numbers to produce very close competition for pretty much every kind of boat that takes part. The more a class takes part in the Winter Series, the more accurately the Great Lakes handicap can be established for that type of boat. However, nothing is ever set in stone, and the Great Lakes is one of the most dynamic handicapping systems in the world.

Seldén Mast Ltd is back as title sponsor for the second year. Steve Norbury, Seldén’s managing director, commented: “We produce masts for the vast majority of dinghy classes in the UK, so it’s great to be able to support this series which reaches out to all forms of small-boat racing across the country."

Previous title sponsor, GJW Direct, stays on as media sponsor - helping fund the tireless work of Tim Olin, the photographer who drives up and down the M1 to cover the events and provide some of the most colourful images from the UK dinghy racing scene, bringing light and colour to the gloomiest months of the British year.

The Seldén SailJuice Winter Series offers prizes for a number of special categories, including Youth, Women and Families. With organised youth racing in the UK focused on singlehanded or youth sailing with youth in doublehanders, the Winter Series offers a place for parents and their children to compete side by side. Good examples of this are the regular competitors like RS800 father and daughter duo, Ralph and Sophie Singleton, and father and son team in the Norfolk Punt, Colin and Oly Murray.

Among the special category rankings and prizes are....

If previous seasons are to go by, there will be approximately one thousand competitors taking part in up to a hundred different types of boat, ranging in speed from the RS Tera up to the International Moth. The willingness of the Seldén SailJuice Winter Series and the Great Lakes Group - who run the handicap numbers for the Series - to accommodate virtually any kind of sailing dinghy into the competition is very attractive particularly to those fleets that struggle to establish a number on the RYA PY system. Equally, the Series has also proven popular with big fleets like the RS Aero who have the strength in numbers to run their separate events, yet still enjoy competing alongside other types of dinghy in mixed handicap competition.

For the overall winner, they will be awarded the perpetual trophy created in 2018 by Seldén, and which will be presented at the prizegiving at the Dinghy Show. The prizegiving has become the biggest opening event of the Dinghy Show weekend, and attracted almost 200 people to the Saturday morning ceremony. Last year’s popular winners were Simon Horsfield and Katie Burridge in their 2000 doublehander, but will they be the first team ever to successfully defend their Winter crown?

Entry for the events is now open at www.sailjuiceseries.com

Seldén Mast Ltd is the world leader in dinghy spars. More races are won by Seldén Spars than any other brand. Dinghy spars are made using our unique XPS aluminium with CNC cut tapers, automated welding and heat treating resulting in the highest quality and most consistent dinghy spars available. Seldén produces about 400 carbon masts per year for boats including high performance dinghies and race yachts using state of the art Mandrel Filament Moulding Technology.