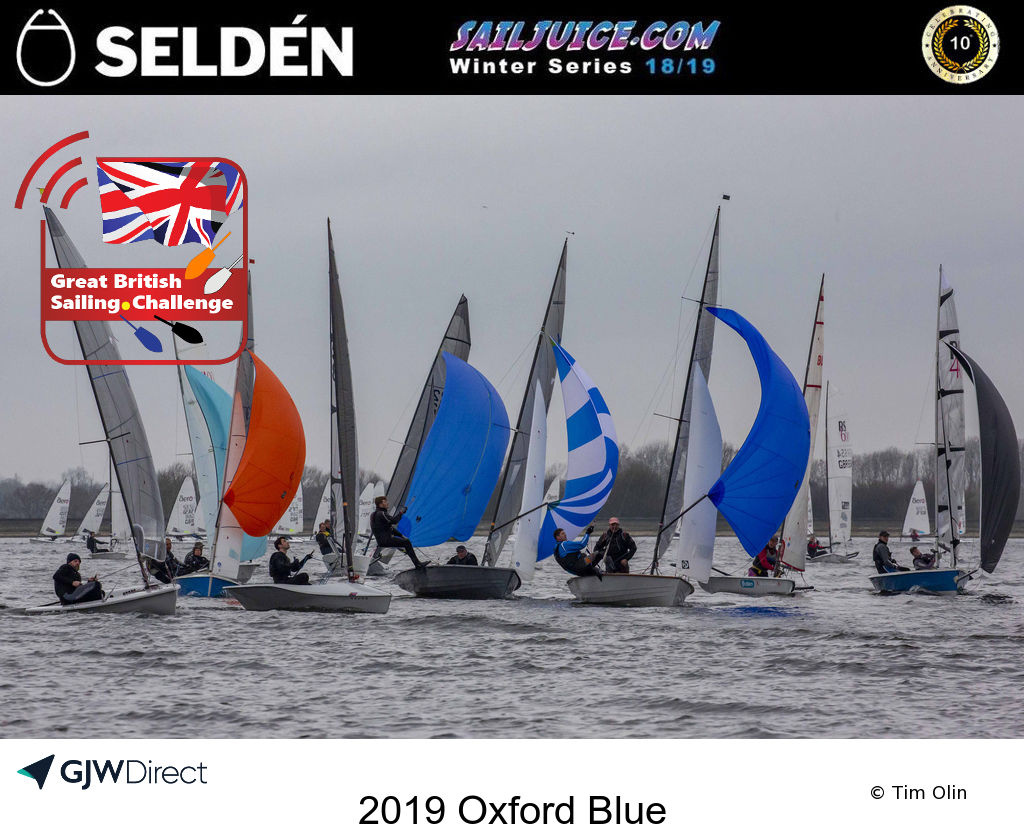 Peter Gray powered his National 18 to victory at the Oxford Blue, the seventh and final round of the Selden SailJuice Winter Series which took place last Saturday with a maxed-out 160-boat entry....

Peter Gray, Richard Pepperdine and Simon Forbes powered their way three-up to victory in a National 18 at last Saturday’s Oxford Blue, concluding the 2018/19 edition of the Selden SailJuice Winter Series.

Farmoor Reservoir was like Piccadilly Circus, with 160 boats of various shapes and sizes packed on to the reservoir. A big chunk of the entries, almost a third of the total number, were RS Aeros competing in their Winter Championship. The light airs prevailed for most of the day until the tail end of the third and final race saw the gusts kick up to 18 knots and caught a few people napping, with capsizes ensuing.
The fluky conditions tended to favour the hiking singlehanders and slower boats like the Comet Trio and 2000 who made the most of the short, sharp gusts. Gray kept the big, powered-up National 18 trucking along nicely, with Simon Forbes on the trapeze when most other trapeze sailors were still crouching on the side. “The conditions suited us really nicely today,” said Gray, who won this Series seven years ago crewed by Rachael Rhodes in a Scorpion. “Sailing a powered up boat like the 18, it’s felt like this has been a windy Series all winter, so it was nice for us to sail in our sweet spot today.”
Results   The 2000s have performed well throughout the season, and Jasper Barnham and Serena de Nahlik finished just two points off victory, winning the middle race of the day. Finishing tied with the 2000 but losing out on tiebreak was the Comet Trio Mk2 sailed by Alex and Bob Horlock with Andrew Snell’s K1 keelboat just a point off the podium. In fifth was Jon Emmett in a Laser, the Olympic gold medal winning coach still showing that he can still sail fast, as well as coach others and write books about the subject. Mr Aero himself, Pete Barton, was top RS Aero in sixth overall, just 0.5 points in front of another RS Aero 7 sailed by Tim Hire. Former Fireball World Champion and Selden SailJuice Winter Series winner of 2012/13 Tom Gillard won the first race of the day in his Solo and ended up eighth overall.
The winning National 18 was the only trapeze boat in the top 10 overall, the next best being another N18 skippered by Colin Barry to 13th overall, one place ahead of an Osprey that has competed at all seven events this season, sailed by the son and father duo of Ben and Simon Hawkes.
SailRacer GPS Tracking    Although former Oxford Blue winner Ben Schooling didn’t get much of a look-in with his Musto Skiff this year, he did clock the fastest speed on the track of 12 knots on the SailRacer trackers that were running during the event.
It was a busy but well-managed foreshore, with more volunteers showing up than were actually needed, such is the enthusiasm for this event which has now become established as one of the most popular winter competitions. Pete Gray commented in his victory speech that this was the best run Oxford Blue he has seen.
The final prizegiving for the Selden SailJuice Winter Series takes place at 1030am on Saturday, not long after doors open at Alexandra Palace in London for this year’s RYA Dinghy Show on 2 March. While Oxford marked the end of the Winter Series, it was also part of the Great British Sailing Challenge, a brand new series which moves on to north London on 16 & 17 March for the King George Gallop. The Gallop first took place last year on very short notice when the club launched the race from a standing start, and received rave reviews from those who came to race at King George. This year it progresses from a single pursuit race to a full-on weekend of handicap racing.
For more info on the Selden SailJuice Winter Series, go to www.sailjuiceseries.com
THE EVENTS
The following events constituted the Seldén SailJuice Winter Series 2018/19:
Fernhurst Books Draycote Dash, Draycote Water Sailing Club
17 & 18 November 2018
Datchet Flyer, Datchet Water Sailing Club
8 & 9 December 2018
Brass Monkey, Yorkshire Dales Sailing Club
27 December 2018
Grafham Grand Prix, Grafham Water Sailing Club
30 December 2018
Bloody Mary, Queen Mary Sailing Club
12 January 2019
John Merricks Tiger Trophy, Rutland Sailing Club
2 & 3 February 2019
Oxford Blue, Oxford Sailing Club
16 February 2019
You can find out more about the Series here: www.SailJuiceSeries.com
Photo Credits: Tim Olin
Notes to editors:
Current and previous winners of the Seldén Sailjuice Winter Series
2017/18 Alistair Goodwin (Laser)
2016/17 Matt Mee & Emma Norris (RS200)
2015/16 Ian Dobson & Andy Tunnicliffe (GP14)
2014/15 Nick Craig & various crews (Merlin Rocket)
2013/14 Michael Sims (Solo)
2012/13 Tom Gillard & Simon Potts (Fireball)
2011/12 Peter Gray & Rachael Rhodes (Scorpion)
2010/11 Andy Peake (Musto Skiff)
2009/10 Olly Turner & Richard Whitworth (Merlin Rocket)
SailJuice.com is the ‘how to sail and race faster’ website, with hundreds of articles and exclusive interviews with National, World and Olympic Champions. Professional sailing journalist and editor of SailJuice.com, Andy Rice, came up with the concept of the SailJuice Winter Series (originally known as the SailJuice Global Warm-Up) as a way of increasing participation levels in dinghy racing during the off-season in the UK.
SailRacer manages event websites and processes online entry for major National, International, Youth and training events, providing online scoring, analysis and advanced sports presentation including GPS tracking and live video.
Seldén Mast Ltd is the world leader in dinghy spars. More races are won by Seldén Spars than any other brand. Dinghy spars are made using 6082T6 aluminium with CNC cut tapers, automated welding and heat treating resulting in the highest quality and most consistent dinghy spars available. Seldén produces about 400 carbon masts per year for boats including high performance dinghies and race yachts.